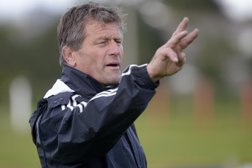 From the Herald Express

FORMER Bath and England hooker Graham Dawe will be part of Brixham's coaching team for the season ahead, it has been confirmed.

Dawe, who left Plymouth Albion towards the end of last season, has been working with the Brixham squad during the summer. The arrangement has been informal until now with Dawe doing a session or two a week, mainly with the forwards.

Dawe, who lives near Launceston, wanted to be sure he could commit to the travelling involved to Brixham two or three times a week.

When head coach Dan Parkes left Brixham at the end of last season after six years in the job – for Dawe's former team Albion – Brixham needed to find a replacement.

The solution is to have two coaches – ex-professional Martin Worthington overseeing the backs and Dawe largely looking after the forwards.

Chris Forster, chairman of the national Three South West club, said he was glad to have Dawe on board.

"Graham is a nationally known coach with a huge amount of experience at the highest levels of the game," said Forster.

"We have been getting to know each other over the past few weeks and it is interesting watching him at work.

"Graham wanted to have a good look at us before making a commitment and I think he has been enjoying the work with our younger players, which helped."